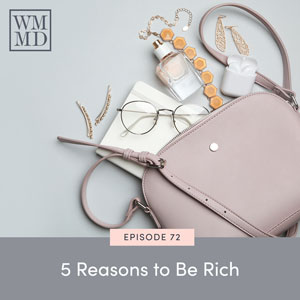 A friend of mine recently asked me why I wanted to be rich. And this question really got me thinking. So, I came up with five reasons to be rich, and they might surprise you a little.

If you consider this question, you might be thinking you want to be rich because you want to help people, or something along those lines. And that’s an amazing reason to become rich. But it’s this kind of justification that actually holds so many women back from declaring that they want to build wealth. And this is a problem.

Tune in this week to discover my reasons for wanting to be rich, and why they are perfectly good reasons just on their own. I’m sharing how we have been conditioned, as women, to always come up with some noble reason why we want to make money, and why we need to start thinking differently.

Hey everyone, welcome to Episode 72. So today's episode was kind of inspired by a really short text conversation I was having with a friend of mine, when she asked me why I wanted to be rich. Now, I'm going to tell you what I told her, but it inspired sort of, well, this episode, and it got me thinking.

So I came up with five reasons to be rich. Notice, I didn't say five reasons why you should want to be rich. And these reasons are probably not what you think. And of course, there's a bit of a hidden agenda here or hidden lesson. And so here are the five reasons and then we're going to get going. You ready?

Number one, because you want to. Number two, because it's your birthright. Number three, to be an example, either for yourself or for the women after you. Number four it sounds fun. Number five, why not?

Now, those are also amazing reasons too, but the reason why I lead with these other types of reasons is because as women we are socialized to need a legit, justified, righteous reason to do anything. Have you noticed? Obviously, I'm talking about money, but this applies to anything we do as women.

As an aside, I've noticed that we tend to judge women who don't have children. I mean, people will say to a woman without children, “You'll change your mind when you meet the right guy.” Or people tell me, as a mom of one, “Why aren't you having a second? When are you having a second?”

But if you asked a man the same question, why don't you have children? And if he simply replies because I don't want to, we don't usually keep questioning him and get the “real answer.”

And so when a woman says she wants to be rich, well, women don't usually say that because she's often met with side eye. And because most of us think we need a “really good reason” to want to make money.

If a woman said, “I'm in it for the money,” I'm pretty sure you're going to have a negative opinion of her or that statement. And frankly, I probably would too, because my human brain will automatically be like, “Well, that's messed up. Well, that's not a good reason.” Because these are sort of like belief systems that we've just inherited our whole lives because we live in a patriarchy.

And so I often find a lot of my clients who are either creating businesses or wanting to invest in real estate, they'll always say, “Well, it's not just about the money, it's to do this.” Which I always find strange.

Now, I'm going to go on a little tangent right now because money is what is going to give you the ability to do whatever you want to do with the money. Right? It’s as if they forget that money is the actual tool or vehicle to create the change that they want.

Now, I work with women physicians and most of us are creating or actively making a difference in this world. Whether it's working as a doctor, whether it's creating their own company or creating some movement, or leading missions elsewhere, right?

But all those things require money and I don't know if it's we pretend it's not the money that helps us get there or I think we're annoyed or embarrassed that money is the actual tool that gets us there. But you have to realize that if you're someone who owns a business, including myself, and even if you have a nonprofit, they all require money to run and grow.

And we, as a society, as a culture, probably all cultures but I don't know every culture, right? But most cultures villainize the pursuit of making money. And I think it's because money is tied to issues of morality because many of us grew up being told that the pursuit of money is bad and that it changes you and it makes you greedy.

I heard one of my coach mentors, Brooke Castillo says that it's not being in it for the money that seems to be the problem, it's only if that's the only reason why you're doing it. And the thing is, even that isn't “bad” right? It's just that, at least for me, money in itself, like if that was the only reason I wanted to be rich, I don't know, that’s just not a good enough reason to me. Not good enough for like other people, but for myself. It's not compelling, like okay, I have a lot of money. And great, I have a lot of money. Now what?

And it's not to say that I want, or anyone should want, a lot of money just to spend it or do things. But if that is the sole reason, there are very few people where, at least, I think that's probably not the sole reason, because it's simply just not compelling enough. And what I've learned is that we, as humans, we are most, I'm not even sure if happy is the word, but we feel most alive when we are growing and giving.

And so the pursuit of money just for money doesn't quite hit those things. I do think that if you want to make a lot of money, if you want to be rich, it requires a lot of personal growth. But I also know that we get so much joy and pleasure by giving, by making a contribution. And I don't even mean just like giving money, but making a contribution, making a difference in the world.

And so what is my lesson here? My lesson here is that don't conflate wanting to be rich as a bad pursuit. And don't think you have to justify why you want to be rich.

Now, coming back to the original question, when my friend asked why I wanted to be rich, this is what I texted back. I said, “I want to see if I can do it. It sounds fun and why not?”

At this time, I see money as kind of a game, but a game with myself to see what I'm capable of. Because like I said, I've learned that there’s a lot of personal growth that has to happen in order to create a lot of money. I guess you could say that I'm in it for the growth, but really does it matter?

At the end of the day, you and I get to decide why. And we get to decide if we like our reasons. Of course, I have lots of other reasons too. Oh, I just caught myself notice how I said “of course” because I'm trying to justify to you why I want to be rich.

But I don't feel the need for you to approve of my reasons. And I just find that often we lead with these reasons that we think will be more socially acceptable as reasons we should give publicly. And what it really comes down to is this, is being unapologetically you.

That is truly what I want for all of you. And to me this means being you, even if it means letting people down. Being you, not having to give people a reason to like you, envy you, or whatever. It's like being you, and I'm not saying not caring what other people think, but it's being you and love being you even when people don't like you.

Not everyone's going to like you. And that's fine. We don't need everyone to like us. We just need our loved ones, our friends, whoever to like us.

So I'm going to leave you with a few questions. Do you want to be rich? If you do, why? And when I ask why just notice what your brain offers. Notice if it's trying to come up with legitimate reasons to be rich, whatever that means anyway.

But I want you to list all the reasons. And notice how you feel or what you're thinking when you're thinking about reasons that seem “selfish.” And feel free to borrow any of the ones I just gave you.

So just to recap, the reasons I gave were because you want to, because it's your birthright, to be an example, it sounds fun. And why not? Now I'm going to add another one because I think the answer I gave to my friend was actually not in those five. And it was to see if I can do it, which basically means to see what I'm capable of. That, to me, just feels so compelling. I just want to see what I'm capable of doing.

And even if I don't get the goal, at least I know that I tried. And I know that so many of you are afraid of trying and failing, so you don't even try. But I think what's worse is regret. Is to have the regret that, “Oh, I should have tried. I wish I tried.” So ladies, go get that money. Don't feel like you have to give anyone an amazing reason for wanting it. And I'll talk to you guys next week. 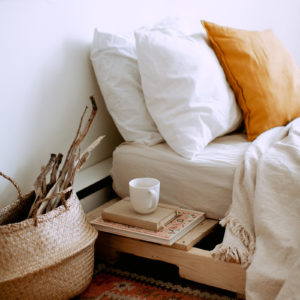 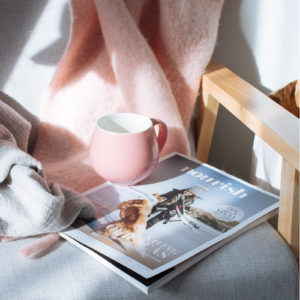 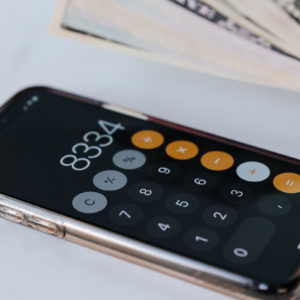