10 Things You Need to Know About Prenups

Listen to Carrie & I discuss prenups over at the Hippocratic Hustle!

You have life insurance. You have disability insurance. But do you have divorce insurance? Probably not. But why? Last time I checked, the divorce rate isn't zero. Thankfully, doctors enjoy relatively low divorce rates–in the 25% range–but still, that isn't zero. In fact, you're much more likely to get divorced than become disabled or die over the next year.

Whether you realize it or not, you sign a legal contract when you get married. You also agree to your state's “one size fits all” prenuptial agreement if you don't have your own (aka a finely tailored suit). While prenups may still feel taboo, it’s time to start talking about them.

Here are 10 things that you need to know about prenups now.

# 1. Marriage is a Legal Contract

When you say, “I do”, you’re probably not thinking about marriage as a transaction. This isn’t the day of dowries, after all. But marriage is a legally binding contract. Because of that, marriage comes with certain rights and financial perks. Rights can vary a bit by state, but generally a marriage contract creates rights that include filing joint tax returns, inheriting property after a spouse’s death, and receiving a spouse’s benefits (Social Security, pension, etc.) after their death. Financial perks include unlimited gifting to each other, spousal Roth IRA and sharing the federal estate tax limit. Marriages also create marital property. That means that the property and income that you earn while married may become property of your spouse. How that share of marital property is determined is based on your state.

Location matters in real estate. It matters in marriage as well. Different states have different laws and rights surrounding both marriage and divorce. Different states have different requirements when it comes to getting married. Some states may require witnesses; others have periods of wait time between requesting a license and when it is finalized. What happens when you’re not legally married? Cohabiting is on the rise with more people holding off on officially tying the knot. While many people believe the myth that cohabiting together automatically creates a common law marriage, common law marriages are actually recognized by very few states and vary widely by state. Just like marriage varies by state, so does divorce. While divorce is often talked about as a 50-50 split, the way in which property is divided in the event of a divorces depends on the state in which the couple lives. Nine states are community property states where property is split in half, and the other states are equitable distribution states. In the case of equitable distribution, the court will decide on how property is split.

# 3. Divorce is a Weapon Of Mass Destruction

Marrying the right person can be hugely advantageous. This isn’t just about love and happiness, although those are supremely important, too. Marrying a spouse that you are compatible with not just emotionally, but mentally and financially, can have huge benefits. When your relationship is strong, you can work harder and more effectively toward goals, and you’re more likely to be able to weather any storms. While doctors are less likely to get divorced than other professionals, divorce does happen. And to borrow the words of The Happy Philosopher, divorce can become a weapon of mass destruction. Certainly, divorce can be devastating emotionally. It can ripple throughout your family and friends. It can also destroy your finances (like it did for this physician), which is why a prenup is actually to the advantage of both partners.

In the event of a divorce, alimony can comes into play. This is especially true if one spouse is the primary breadwinner, which is a typical dynamic in doctor households. Alimony is intended to provide maintenance and support. Unfortunately, states will look at total income instead of the couple's actual spending to determine how much alimony will be due. If the court decides that you have to pay your former spouse alimony, it is either paid out in one lump sum or on a continuing basis. The new tax law makes alimony less palatable. Couples can also reach an agreement on alimony without going to court; but it is only valid if both parties agree.

# 5. Attorney Fees and Then Some

While you may have seen divorces advertised for as little as a few hundred dollars, most divorces become quite costly. An older Forbes estimate stated that divorces that become highly contested can cost $15,000 or even $30,000. Divorce becomes so costly if it is a particularly litigious battle, and that cost is primarily due to legal fees. In many cases, both parties involved in the divorce will retain lawyers. With divorce lawyers' hourly rates starting at $50-$75 an hour but easily clocking in at upwards of $300 an hour, it is easy to see how quickly these bills can mount. In addition to paying for lawyers, there is also a trial fee that has to be paid as well. The longer the divorce proceedings, the bigger the bill. 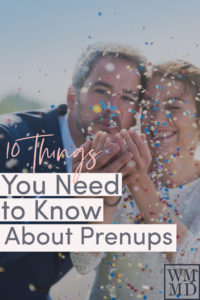 Like clothes, a one-size-fits-all plan can often be a bad fit and an even worse idea. Without a prenup, you are at the mercy of two things: your state and the divorce court you end up in. In addition to deciding how your marital property will be divided based on the state you live in, a judge will also make other considerations, many of which will be based on precedents. That means that other people’s marriages and divorces could influence yours. If no two marriages are the same, neither are divorces. Try as we might, this one-size model just isn’t a good fit.

A prenup is like a finely tailored suit in that it provides a custom fit for your relationship. The key difference between this metaphoric suit and a real custom suit is that the metaphor is actually the real bargain. Divorces are messy, and without a prenup, you are really at the mercy of many different factors: legal teams, judges, state laws, precedents, and your former partner. Sometimes splits are amicable, but sometimes they are far from it. A prenup will spell out how assets should be divided in the event of a divorce, which should minimize the amount of court time and the legal fees.

Romantic love is a modern concept. And people can and should marry for love. But there is nothing romantic about being reckless. While whirlwind romances look good on the big screen, they’re often not in real life. Taking some time to thoughtfully plan out your marriage and discuss your dreams, goals, and ambitions help put a solid foundation under your relationship. Crafting a prenup lets your partner know that you are hoping for the best for them while you are together and in the event that you break up. By crafting a prenup in advance, you and your partner are able to make decisions based on what is truly best for each of you instead of in the heat of the moment during a divorce. Calmer emotions and cooler heads prevail when it comes to finances, and planning for prenup is no exception.

While discussing divorce doesn’t seem particularly romantic, it’s actually a really important way to invest in your marriage. But a prenup is just the beginning when it comes to investing in your marriage. In addition to being a contract, a marriage is a choice and a commitment that you and your partner make every day. Being married is hard work. Whether it’s taking time to go on dates or do small things for the other person or investing in couples counseling before situations get difficult, there are many ways to strengthen your marriage and keep it healthy. It isn’t always easy, and it isn’t always cheap. But it’s an investment that will pay dividends.

While the ideal time to read this post would be before you tie the knot, it’s actually not too late if you’re already married. In addition to prenuptial agreements, courts also recognize postnuptial agreements. A postnup functions similarly to a prenup in that it is a document that outlines how your assets will be divided in the event of divorce, but it is created after you are married. Speaking with a legal expert will help you understand how both prenups and postnups work in your state.

When we talk about people being underinsured, we often think about homeowners insurance or auto policies. The truth is one of the biggest ways we are underinsured is actually related to marriage. A prenup isn’t setting your marriage up to fail. It’s a plan to keep you and your partner on the same page financially and to show your partner that you want the best for both of you if things don’t work out. Instead of thinking of it as taboo, maybe it’s time to start thinking of prenups as romantic.

Get the bestselling book - Defining Wealth for Women. 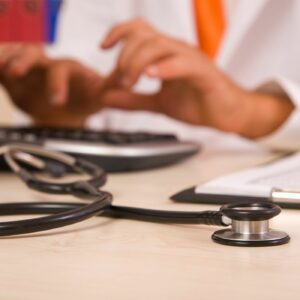 146: Do You Need to Try Something Different?

Apple Podcasts Spotify Stitcher We’ve had some super-productive coaching calls inside my program Live Wealthy about a wide range of topics, so I’m bringing you some of the pearls that came out of those conversations because I know they’ll apply to many of you listening and help you discover where you might need to try… 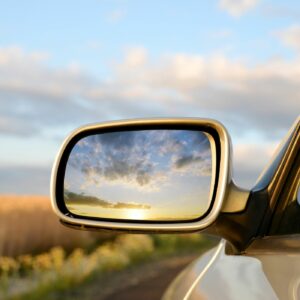 145: Past Performance Does Not Predict Future Returns 2.0

Apple Podcasts Spotify Stitcher It’s natural to look to our past to see if we can do something in the future, but is it really helping? This method of analysis is something we’re taught from a very young age. We’re told what we can and cannot do based on our past performance, and we don’t…

144: How to Create Your Future

Everyone is talking about goal-setting and resolutions for 2023. Now, I love all that stuff. We are the creators of our lives, we have more agency than we think, and knowing where you’re going is super important. But this work isn’t about just setting and achieving goals every time. It’s about creating for the future.